The scandal on the “Singing field”: the people of Kiev at the box office massively selling fake tickets to the exhibition of tulips 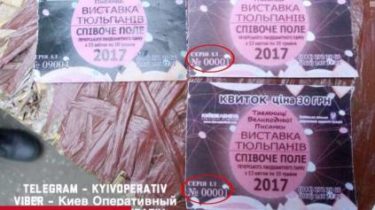 On the “Singing field” in Kiev employees stung by selling fake tickets. The same serial number input documents drew the attention of police, who, along with his family came to the exhibition of tulips, according to a story TSN.19:30.

Lieutenant Vladimir Kirichuk jokes that even on a day off pursuing his favorite work. Law enforcement quickly found out that selling fake tickets for 30 hryvnia not only to him and not just in a single Fund. However, after a scandal erupted, workers then the change is not suspended from work. The tickets give the right, but to comment on anything at the box office don’t want to. “We have an organizer, she explains,” – said there.

The user assures that the Scam itself has just learned from the Internet, because yesterday on the spot were not present. So asking for time to investigate the situation. Like, that’s why no one was suspended – check service is only planned. Meanwhile, the official investigation have already started the police. And it is said that came to call fellow employees of the Park offered 5 thousand hryvnias of a bribe not to let this go. Police are asking the citizens who have kept the tickets to visit the exhibition, look up their numbers and if they match to inform the investigators.