In Kiev desecrated the monument to Heroes of Heavenly one Hundred 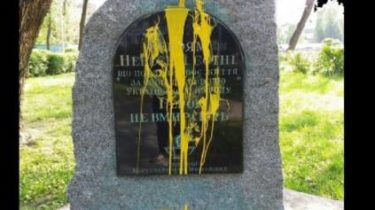 In the Goloseevsky district of Kiev vandals desecrated the monument to the Heroes of the Heavenly Hundred.

About it reports “5 channel”.

Unknown poured yellow paint granite commemorative plaque with the inscription “Heroes never die”. The monument is located in the Metropolitan Park on the street Naberezhno-Korchevatskaya.

Militiamen establish the persons involved in the Commission of a crime, and possible witnesses.

We will remind that earlier in the center of Kiev, unidentified persons poured red paint on the monument to Prince Vladimir the Great. It is reported on his page in Facebook an employee of Ukrainian Institute of national memory, Olena Khaliman.