The court allowed Yanukovych to participate in the meeting via Skype 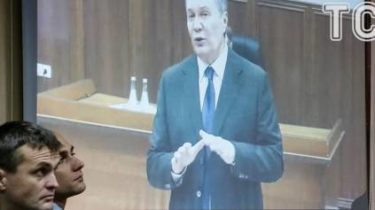 The presiding judge of Obolon district court of Kiev Vladislav Devyatko gave permission to the protection of the ex-President of Ukraine Viktor Yanukovych to organize a videoconference for participation of their client in trial.

“The court, after consulting on the spot, ruled on a petition by the defense to satisfy partly … to provide an opportunity for the defense to Yanukovych’s participation in the meeting by video link,” said the judge.

He added that the accused was summoned to the preparatory hearing in accordance with the standards defined by law.

However, given article 6 of the European Convention on human rights, and given the jurisprudence of the European court, the court found it necessary to grant the defence the possibility of participation of the accused in preparatory hearing by videoconference.

We will remind, Yanukovych said that had a number of questions to the GPU is relatively open against him of treason. Yanukovych said that is not properly received suspicion of treason, and therefore asked not to consider himself a suspect. This is stated in the letter by the former President to the Pechersk court on January 18.

Note that March 28, the court of Appeal instructed the Obolonskiy district court of Kyiv to consider the case of former President Viktor Yanukovych, who is accused of treason.