The militants had received from Russian anti-aircraft missile complex “OSA” 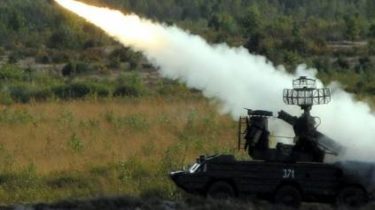 Two days fighters from the Novoazovsk Celtica military observation drones with anti-aircraft missile complexes “Wasp”. A child of the Soviet defense industry is in service with Russia, says the story TSN.19:30.

The military said that the heavy missiles of this complex have often flew over their heads. “The day before yesterday, two shots, two yesterday, one fell in the village, the other exploded in a field”, they say. Ukrainian drone was the victim of a missile close to Lebedinsky. The wreckage of the rocket was examined by sappers. “Supplying anti-aircraft missiles separable. Dozhilis that it is already shooting and we still Minsk agreements and all the rest”, – the fighter speaks with a pseudo “Fix”.