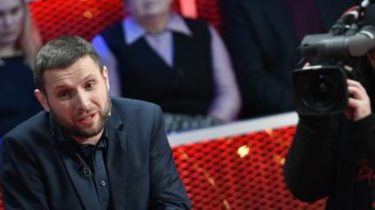 The people’s Deputy of Ukraine Volodymyr Parasyuk said Saturday, may 6, at his parents ‘ house without permission came the journalists of the channel TRK “Ukraine”, which belongs to the oligarch Rinat Akhmetov.

“Only without my consent and any permission to go home to my parents came the “journalists” of the separatist channel TRK “Ukraine”, which belongs to oligarch Ametova. I never let the journalists have access to his personal life. At my house dozens of times was a different kind of media. But like TRK “Ukraine” I despise. This Pro channel engaged by enemy propaganda and because of how they are in our country the war. Now they shoot against me custom movie because blood and for the fact that I raised the issue of broadcasting in their broadcast serials of Russian production, which pay homage to the army of the aggressor. I demanded and will demand that channels such as the TRK “Ukraine” and “inter” was prohibited”, — stated in the message.

We will remind, recently it became known that the people’s Deputy Vladimir Parasyuk requires to explore a broadcast TV channel “Ukraine” Russian TV series. An appropriate request, the MP has formally written to the Chairman of the national Council Yuriy Artemenko and the head of Goskino Philip Ilyenko. Deputy address parasiuk was also signed by Sergei Leshchenko, Yegor Sobolev, Igor Lutsenko, Yuriy Derevyanko and other elected officials. They want to affect the channel and explain how fresh the product of the country-aggressor has received the license certificate.