The action “immortal regiment” will take place in Kyiv – Tandem 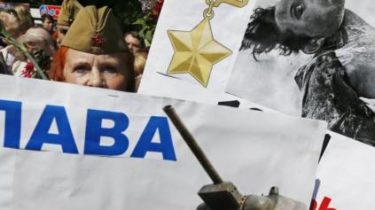 Action March “immortal regiment”, which is held annually in Russia, will take place on may 9 in Kiev.

This was stated by Advisor to the Chairman of SBU Yury tandit on air of one of TV channels.

According to him, no reason to ban the event is not, however, the SBU will take all necessary measures to prevent provocations.

“In the framework of a hybrid war, which is organized clearly against Ukraine, used various occasions, including this occasion. We need to give people the opportunity to come out and we are going to provide, but in any case should not allow was this kind of provocation,” — said of the Tandem.

We will remind that the head of the Center Voyenno-political researches, the head of group “Information resistance” Dmitry tymchuk reported that Russian agents are preparing riots and provocations during the may holidays in some regions of Ukraine.

“It is expected the aggravation of the situation in the Kherson and Mykolaiv regions. In Nikolaev in the last two weeks intensified various Pro-Russian forces, primarily the so-called Russian Cossacks, emissaries arrive from Russia”, – he stressed.

In the Donbass for the may holidays, the militants are preparing provocations in the cemeteries

According to Timchuk also at risk remains and Kiev.

“To the victory Day celebrations planned action “Nobody is forgotten and nothing is forgotten”, which in essence is actually a clone of the action “immortal regiment”, which is held in Russia”, – said the MP.