Waiting for the command “Forward!”: Ukrainian Marines settled near Kominternovo 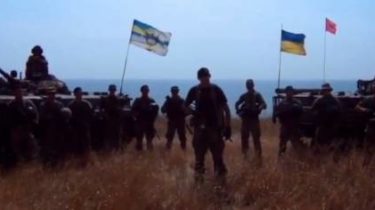 The gray area around Kominternovo transformed by the militants in a continuous fortified area. The trenches are located directly under the Windows of civilian houses – obviously, to cover the latter from the possible fire of the army response to provocations, says the story TSN.19:30.

At the same time, the Marines are very close to the enemy and even hear the cries of the drunken occupants. Not enough fighters of one team to go forward. “We are waiting for her more in 2016”, – confessed one of the soldiers. While it’s not, get along military life. Communicator “Skipper” in the hours of calm seeks out discontinuities wired and repairing them.

A marine in his work is backed up by two great friends – Bomb and Milka. Dog turned to the military for a long time, and now will not step away from your pet. “For whatever distance I went, they are always with me. Heat, cold, wind, rain – they are always with me” – says the “Skipper.” He adds that the four-legged even save him during a fire: when to hide in a flat field nowhere, dogs lie down at the fighter from the side, where she could hear gunshots or explosions to cover up a host.