“The Eurovision” in Kiev, where the fan zone and where to make a themed selfie 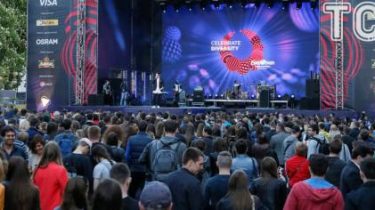 Cleaned Kiev to the song contest “Eurovision“, as is often the case, literally until the last minute. In several places in Kiev has been updated and freshened. New asphalt, sidewalks with tile, newly planted flowerbeds.

Ukraine holds one of the most expensive of the “Eurovision” in the world. Spent $ 30 million. It’s a quarter of a billion hryvnia. And as they pay back – still completely unknown. Because even with international advertising – puncture. Organizers say they did not. Now the only hope for a selfie – they say that visitors to Eurovision will post photos in social networks, and accordingly poreklamirovat Ukraine.

When Ukraine hosted the Eurovision song contest after the victory of Ruslana, the selfie had not yet been invented. And the scope of the competition was not the same. Then it was held at the sports Palace.

This time everything is much bigger – has touched not only the center. Most fortunate area around International exhibition center near the metro station “left Bank”, where they will take competitive performances. Around repaired roads, built ramps, upgraded the station subway, promenade, public gardens.

Meanwhile, on the right Bank placed evrogorodki for fans. Main fan-zone on Khreshchatyk. The entrance here is free. There really is something to do. For example, play table tennis, relax on the bag or to feel like the star of “Eurovision” on the stage.

In the fan zone at the Sofia area, you can take a selfie near a huge crystal microphone “Eurovision”. Still have the fan zone on Mikhaylovskaya square, Postal square, Wroclaw near Maryinsky Park in Kiev on Pechersk fortress, Troitskaya square near NSC Olimpiyskiy, on Kontraktova square.

Note that the semi-finals of “Eurovision” will take place on 9 and 11 may, the final on 13 may.