The tense situation in the area ATO: militants fired 27 times the Ukrainian military 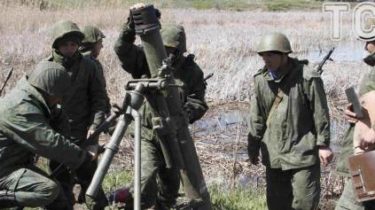 Sunday, may 7, the situation in the zone of the antiterrorist operation remains tense: fighters 27 times opened fire on positions of Armed forces of Ukraine.

This reports the press center of the ATO headquarters as of 18: 00.

Mortars caliber 82 mm, the rebels were beaten near Experienced and Verhnetoretskogo, and from APCS, mortars 120-mm and 82-mm, rocket-propelled grenades and heavy machine guns – strongholds near Luhansk.

In the seaside direction, it was hot near the Water – here the militants fired anti-tank missile systems, mortars of caliber of 82 mm, APCS, grenade launchers and heavy machine guns.

The 82-millimetre mortars, grenade launchers and large-caliber machine guns, the militants fired at VSU positions near Krasnogorovka. The Marines positions near Shyrokyne, the separatists fired from APCS, and near Pavlopol – weapons Armored vehicles.

The positions of the Marines near the Lebedinsky, the militants fired heavy machine guns. The Ukrainian military near Novoselivka Druha fired from guns of large calibers, and in Gnutovo – from small arms.

Gunmen used the bodies of dead Ukrainian scouts to promote

On Lugansk the direction fighters fired from 120-millimetre mortars, grenade launchers of various systems and large-caliber machine guns at the positions of AFU near the Crimean and Novozvanovka.

We will remind, for the past day militants in the Donbass 45 times opened fire on strong points of the Ukrainian military. Five members of the Armed Forces of Ukraine were injured.