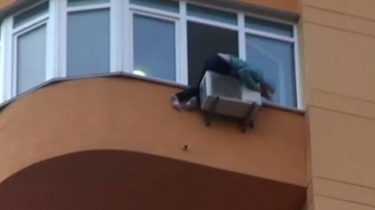 Capital field investigators have saved 32-year-old native of Lugansk region from suicide. She tried to jump from the eleventh floor flats, but caught in the cooling unit of the air conditioner. From there it took the staff of criminal investigation Department of the Obolonsky police Department.

Children against “blue whales”. In Lviv Schoolgirls rescued from suicide of a classmate

A passerby informed the police that on the eleventh floor is home to the air conditioner sits a woman. The cops broke down the door and entered the apartment. During the inspection of the premises, police found that the woman had already tried to commit suicide: on the chandelier hanging scarf, and under it stood a chair.

The woman was intoxicated and did not respond to the entreaties of law enforcement officers not to do anything stupid, the report said.

“While police were comforted and distracted the hostess of the talk, one of the operatives grabbed the woman and dragged to the balcony, preventing to make a fateful step. To explain to police officers the reason of his suicidal tendencies, a woman could not work with her doctors and psychologists,” he told police.

We will remind, in March in the city Stebnyk in Lviv, the student climbed onto the roof of nine-floor house and tried to commit suicide. He was able to save.