Poroshenko with U.S. congressmen discussed strengthening the defense of Ukraine 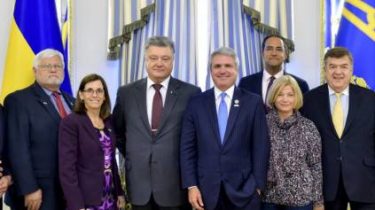 The President of Ukraine Petro Poroshenko has held a meeting with a bipartisan delegation of the house of representatives of the Congress of the United States.

The head of state thanked for the strong bipartisan support for Ukraine from the U.S. Congress to counter continued Russian aggression and strengthening the defense of Ukraine and implementing the necessary internal reforms.

Poroshenko informed the congressmen about the situation in the Donbas and continuing provocations and violations of cease fire from the Russian-controlled militants. During the meeting, stressed the need to maintain and strengthen international sanctions against Russia until the complete fulfillment of the Minsk agreements and to restore sovereignty and territorial integrity of Ukraine, including Crimea.

The President hopes that Congress will actively support Ukraine in the future, including through adoption of relevant laws and resolutions.

Recall that U.S. Secretary of state Rex Tillerson will act as the advocate of Ukraine in negotiations with Russia, and Washington can join the Normandy format.