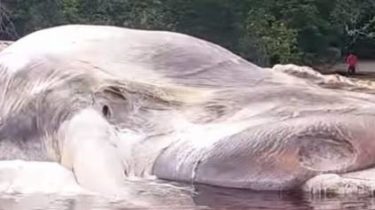 Unknown sea monster made off the coast of Indonesia. Local fishermen found on the beach the body of 15-metre-long marine animal, according to TSN.16.45.

According to one version it is a giant squid, the body length of which may exceed 16 meters. According to another version, on the coast the body was washed up humpback whale.

Experts hope to find out what kind of animal is it and has taken the analysis of pieces of tissue. But the fishermen hope that the government will still help them clean up from the shore 15-metre body, which had already begun to decay.