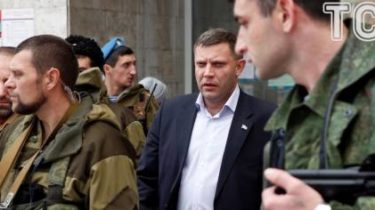 He said this yesterday, may 11, at the stadium “Olympic” in Donetsk, during the celebration of the so-called “Republic day”.

Likely that the gunman tried to declare the “occupied” cities, released by the ATO, however, viability and temporarily controlled “DNR” Amvrosiyivka, Donetsk and even.

“I want to congratulate every city, every village, every district, even those that are now under temporary occupation – Mariupol, Kramatorsk, Amvrosievka, Slavyansk, Donetsk and Krasnoarmeysk (Pokrovsk),” – said the leader of the terrorists.

We will remind, earlier it was reported that the parents of the leader of the Donetsk terrorists Alexander Zakharchenko live on the territory controlled by Ukraine and receive pensions. In the words of the Minister of social policy of Ukraine Andriy Reva they are internally displaced, they are entitled to a pension, they receive it, despite the fact that the son in them, the bastard.