Investigation, “Schema”: before nationalization of “PrivatBank” for the firm-bubbles was derived 110 billion hryvnia 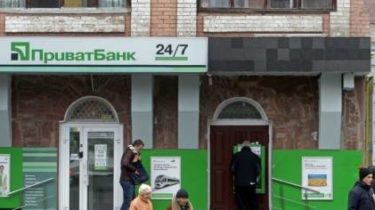 110 billion hryvnia before the nationalization of “PrivatBank”, which took place in December 2016, were removed to a number of companies that exist only on paper. About this in his investigation, which was published on Friday, may 12, informed the journalists of the program “Schemes”, a joint project of Radio Liberty and the canal “UA:the First”.

They were able to access the audit firm Ernst&Young analysis project financial and economic activities of “PrivatBank”. This is the last before the nationalization of the independent report, which showed the real state of his Affairs. A document dated 22 November 2016 is marked “Confidential, restricted”.

Note that in Ernst&Young at the request of journalists “Schemes” to confirm or deny the authenticity of the document and to report whether there had been any in it even some changes, declined to comment, citing company policy.

According to the document, the auditors verified the largest borrowers and found: on 1 April 2015, the risk of loan defaults was measured in excess of 82 billion, and as of October 1, 2016, the figure increased to more than 139 billion.

According to the document, stated in the investigation, “PrivatBank” restructured credit portfolio: debt 170 previous borrowers has been translated into more than 30 new that steel owes the Bank more than 110 billion hryvnia.

With the Unified state register of legal entities reporters learned ‘ the registration of new firms, their founders and Directors of and tried to contact them.

But the result, according to the investigation, “Schemas” failed to communicate with either the founder or the head of the companies, on which “hang” billions of dollars in debt. Specified in the registration documents and phone numbers with either no answer, or they are not maintained. The address of registration of these firms, their founders and leaders of the journalists did not find anyone.

Journalists “Schemes” addressed to former shareholders – Igor Kolomoisky and Gennady Bogolyubov, and the ex-Chairman of the Board Alexander Dubilet to about this, but none of them commented on these facts.

Oleksandr Shlapak, who was the head of “PrivatBank”, after its nationalization, also declined to comment, noting: “Until the publication of the result of the audit and completion of an internal investigation do not consider it responsible to comment on something”.

The Bank said that borrowers still have time to return the funds until 1 July 2017. “If this does not happen, then, of course, the current owner of “PrivatBank” – the Ministry of Finance, the management of “PrivatBank”, its independent Supervisory Board should start the processes that make all the banks when the borrowers do not repay the loans. This claim settlement, this courts order to return the assets that were withdrawn from the Bank”, – said the Deputy Chairman of the Bank Ekaterina Rozhkova.

Economists believe that the question of why “PrivatBank” is not nationalized earlier, when a “hole” in the balance sheet was less should be subject to a separate investigation.

“I am sure that the experts of the national Bank knew (because the whole market knew) about the business model of the functioning of “PrivatBank”, but why did they cover her? I think that there is a separate investigation should be done. Why 2015 was not adopted for this decision is unclear. If in 2015 the damage have had to put a nationalization or bankruptcy “PrivatBank”, which roughly would amount to 80 billion hryvnia, then it can grow to 150 billion hryvnia” – said Eric Nyman.

Earlier, journalist and host of “Money,” Alexander Dubinsky has also published some of the documents from the project report of the auditors of the company Ernst & Young, who denies the words of the head of the NBU Valeria Gontareva about the loss of “PrivatBank” prior to nationalization.

The head of the financial regulator stated that the auditors allegedly found in the Bank issuing 97% of the corporate portfolio, “related parties”. The journalist notes that the Ernst & Young do not confirm this.

“So, according to the draft report E & Y the Bank’s losses by the end of 2016, which became the basis for this insane capitalization (125 billion UAH – Ed.) an auditor is not confirmed. This means that the Bank formed reserves under the “insider debt” is taken from the air,” said Dubinsky.

Earlier, Gontareva said that the auditors found in “PrivatBank” fraudulent transactions by 16 billion hryvnia. The last night before the nationalization of “PrivatBank” of the financial institutions allegedly brought more than 16 billion. She also claimed that a thorough check in “PrivatBank” found that corporate loans to related parties amounted to 97%, as previously thought, and 100%. Therefore, the government will need to re-capitalize the financial institution.

The decision on nationalization of “PrivatBank”, the Cabinet adopted on 18 December.