“Let’s create a world!”: Trump in one tweet posted a photo with Lavrov and Klimkin 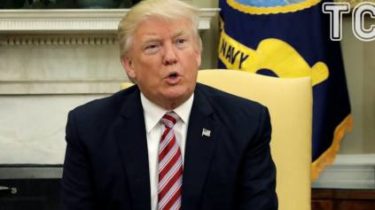 The President of the United States Donald trump in one message on Twitter posted pictures of his meetings with the Russian and Ukrainian foreign Ministers.

The trump and Lavrov on the photo stand. In the photo with Klimkin trump sitting at a table, and the Ukrainian Minister stands beside him.

Yesterday, on the same day – I had meetings with Russian Foreign Minister Sergei Lavrov and the FM of Ukraine, Pavlo Klimkin.#LetsMakePeace! pic.twitter.com/SPiIrJqI6G

Recall that U.S. Secretary of state Rex Tillerson will act as the advocate of Ukraine in negotiations with Russia, and Washington can join the Channel format.

Earlier in Washington ended with the meeting the foreign Minister of Russia Sergey Lavrov with the President of the United States Donald trump and U.S. Secretary of state Rex Tillerson. As reported by Lavrov at the final press conference, the question of lifting the sanctions against Russia was not discussed.

“The sanctions we have not discussed is the unilateral action of the US administration,” – said Lavrov.

During a meeting with trump discussed the Syrian and Ukrainian issues. According to Lavrov, “at the meeting agreed to solve international problems together.”