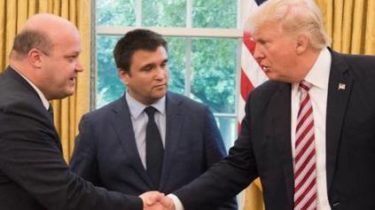 The President of Ukraine Petro Poroshenko commented on the possibility of attracting US to “Norman format” talks on the settlement of the situation in the Donbass.

So, during the conference, 14 may, Poroshenko stated that in the near future the election of a special representative from the United States to coordinate actions with Ukraine.

Klimkin have “disclosed” the contents of the meeting with trump: Russia will not be supported

“The US is not only our strategic partner but also one of the guarantor countries under the Budapest Memorandum. We look forward to a very powerful and efficient support for Ukraine from the United States, including in the “Normandy format”, – said the President.

And next week the President will hold hours of talks with German Chancellor Angela Merkel to prepare for the meeting in “Norman format”.

In exactly one week I will have important talks in Berlin with German Chancellor about the preparation of the meeting of the Normandy format pic.twitter.com/gTL0qoJtmX

In addition, Poroshenko boasted sparkling conversations with the US President Donald trump.

“Ukraine “Norman format”, according to my information, will be the theme of the meeting Merkel and new French President of Macron,” the President added.

We will remind, earlier the foreign Minister of Ukraine Pavlo Klimkin said that the US is ready to join in the coercion of Russia to implement the Minsk agreements in different dimensions. According to Klimkin, it can happen in the form of “individual dimension”, which will, of course, very closely coordinated with the “channel format”. The foreign Ministry said that the U.S. has not yet become part of the “Norman format”, but supports the efforts of German and French colleagues in resolving the situation in Donbas.

On 11 may, the Minister of foreign Affairs of Ukraine Pavlo Klimkin met with the US President Donald trump and Vice-President Mike Pence.

Meanwhile, now Belarus is preparing a meeting of the presidents of Donald trump and Petro Poroshenko.