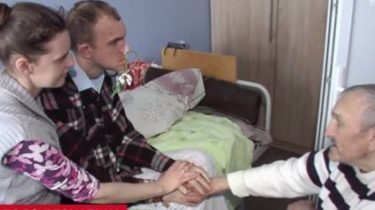 Homeless Vyacheslav Yastrubenko, which is fixed said the residents of one of Kiev districts, for the first time in 17 years I saw my son Nicholas. The almost two years lies in a coma after an unsuccessful operation on the brain, according to a story TSN.19:30.

About yourself homeless Vyacheslav Nikolaevich has told that he is 68 years old, former military, had a family and lived in Kherson, then divorced and, in 1999, moved to the capital. In Kiev I rented an apartment, worked, but over time the earnings was not enough housing, and then lost the passport.

When the elderly man was in the hospital, where he was diagnosed with a hip fracture, reporters found in the social networks page of his son. Page full of old photos of Nicholas and Vyacheslav. However, the news that father, whom he had sought for many years, was the son to hear, because lies in a coma after brain surgery. “He was always thinking about dad. Well remembered. He was looking for,” says the wife of Nicholas Elena Vorob.