1043 days Gontareva: how falling national currency, the liquidated banks and the NBU in the “vacations” Chapter 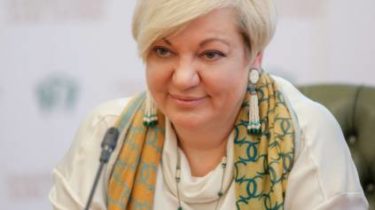 Valeria Gontareva this week worked for the last day in the seat of the head of the national Bank.

She was in charge of the National Bank 1043 of the day, reads the story TSN.Week.

On the day when she went to work — 20 June 2014, one dollar was worth UAH 85 kopecks. 11 Since then, the hryvnia fell by two and a half times. Several times exceeding the level of 30 UAH for one dollar.

Over these nearly three years the national Bank has discontinued the 88 commercial banks: unemployed making 35 thousand of their employees. These actions were explained by the need to clean up the banking sector from institutions that launder questionable funds.

Gontareva will fire when will elect his successor – Poroshenko

But as a result of clearance, experts say, was hurt in the first place, the ordinary citizens of Ukraine. They lost almost 100 billion hryvnia. Another 120 billion in lost business.

As a result, we have: total loss of public confidence in the banking sector. And $ 2 billion in cash kept at home Ukrainian politics. All the money was taken out of the economy — for fear of disaster.

Case Gontareva today investigating anti-corruption Bureau. We are talking about artificial understating of the price of the assets of bankrupt banks: from 415 to 99 billion to sell them for pennies of the desired structures.

First, the sea. Gontareva told what to do after dismissal

The rumors about the resignation Gontareva during these more than thousand days there were more than a dozen times. However, even after working my last day Valeria Gontareva is long enough to maintain influence in this chair.

The fact that the enterprising boss of the Bank resigned and left for a long holiday almost 2 months. To fire an employee who is on vacation, the Verkhovna Rada and the President can’t.

And then will come the time of the parliamentary recess. And the procedure will last until the end of summer. All this time the national Bank will be chaired by the Deputy Gontareva Yakov Smoliy. Such is the stable stagnation.