In Nikolayev, unidentified persons severely beat the Deputy of the city Council, the man was cast on 20 stitches on the face 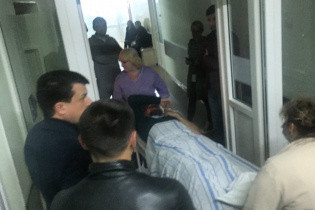 In Nikolaev unknown attacked the Deputy of the city Council from the party “Association “Samopomich” Vyacheslav Apanasenko.

This was announced on his page in Facebook the Deputy of the Nikolaev city Council from party “Union “Samopomich” Fedor Panchenko.

“The evening of may 15 was an audacious attack on the Deputy of the Nikolaev city Council from the faction of “Association “Samopomich” Vyacheslav Apanasenko,” said he.

According to Panchenko, his colleague less than a week ago noted that he, as a member of the city Council is under pressure. In particular, on may 9 unknown threw gasoline on the facade of the restaurant, as was reported to the police.

“This is not the first attack on the Deputy of the city Council that takes a principled stand on issues of city development. This fact shows that before the city crime defenseless any resident, regardless of status and position,” he added.

Separately, he noted that criminals have become the norm, the attack on city Council members as a way to influence their social position.

“The faction “Association “samopomich” Union considers this attack as a challenge not only for law enforcement but for the entire civil society. Require law enforcement officials of the city to take personal control of the investigation of this crime and to prosecute not only the perpetrators, but also their customers,” concluded Panchenko.

In turn, the local edition “news-N” said that the attack Apanasenko received a traumatic brain injury and multiple bruises. The most serious damage to the MP was the wound of the person, which put about 20 stitches.

It is also noted that after the attack, the Deputy was hospitalized in BSMP.

We will remind, earlier in Odessa in the Parking lot near his home in the village Kotovsky was severely beaten by the chair of the Razdelnyansky district Council from the “Opposition bloc” Felix Segal. According to party members Seagal, a man was attacked by four unknown persons. They inflicted multiple blows to the head with a heavy object.