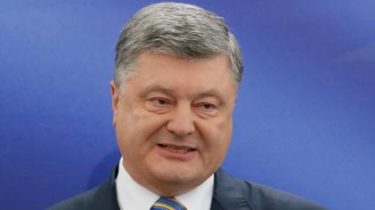 The President of Ukraine Petro Poroshenko commented on the decision on introduction of sanctions against some Russian sites. In particular noted that Ukraine is required, the conditions of hybrid war waged against our country Russia.

“The massive cyber attack of the Russian Federation around the world, in particular, the recent intervention in the election campaign in France, indicate that it is time to act differently and more strongly. Ukrainian Internet providers must stop providing access to “Vkontakte”, “Odnoklassniki”, “Yandex” and other Russian services. Official page of the President in these services will be closed. I urge all compatriots to immediately leave the Russian servers because of security reasons,” – said the President. 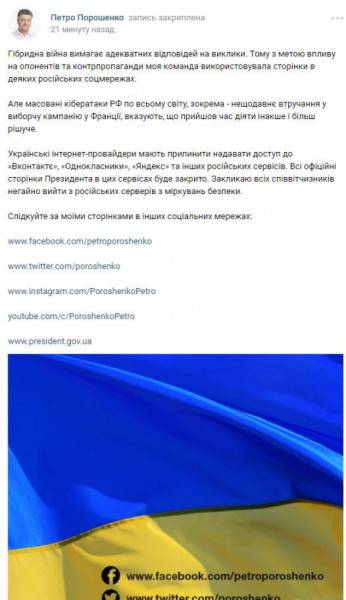 As previously reported, on may 15 the President of Ukraine Petro Poroshenko by his decree led to operation NSDC’s decision dated April 28, 2017 “On the use of personal special economic and other restrictive measures (sanctions)” in respect of a number of Russian companies. According to information contained in the Annex to the decision of the Council, it is proposed for a period of three years to block the assets of Russian sites “Vkontakte”, “Classmates”, “Mail.”ru and “Yandex” and to forbid Internet providers to provide access to specified resources. While all of these sites are available in Ukraine.

Note that in the offices of ISPs, which bear the embodiment of the decree of the President, said that while studying the possibility of blocking and not sure if will find the necessary tools. In particular, note that the lock will take time and money, because now the tools have. In the “Ukrtelecom” noted that it has already begun to implement the decree.

Prohibited in “Vkontakte”, in turn, said that he always tried to be “beyond politics” and promised to protect interests of their users, which in Ukraine there are 16 million monthly. The market reacted to the ban by the fall of the stock subjected to “Yandex”.