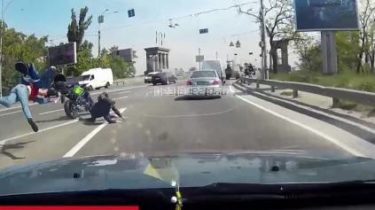 Became known some details of the tragic accident on the bridge Paton in Kiev, where the day crashed motorcyclist and seriously injured his passenger. Two-wheeled vehicle traveled in the direction of the Boulevard of Friendship of Peoples at breakneck speed, according to a story TSN.19:30.

Witnesses say that the motorcycle do not fit into the rotation, since the speed about 150 km/h make it physically impossible. But witnesses say that around with such speed and raced the culprit. “Not lost control, it swerved, hit the nose”, – said the driver Andrey Romanchenko.