Tense situation near Avdeevka and intense fire near the Crimean. Digest ATO 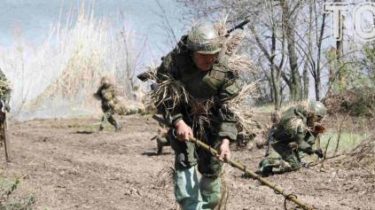 From the beginning of the day militants 30 times opened fire on positions of Armed forces of Ukraine.

Coastal areas. The militants repeatedly shelled Ukrainian strongholds in Pavlopol from mortars of calibers of 120 mm and 82 mm, grenade launchers and small arms. Strongholds near Shirokino bandits fired from APCS, Chermalyk near Novotroitsk – grenade launchers near Lebedinsky – from heavy machine guns. To the North, in the area Krasnogorovka, militants fired 82-mm mortars and anti-tank hand grenade.

The direction of Donetsk. The most tense situation remains in the southern outskirts of Avdeevka. There the enemy has used the 120-mm and 82-mm mortars, and small arms and heavy machine guns. The same weapons the gunmen early this morning fired at strong points of ATO forces near Verhneuralskogo. In addition, from mortars of various calibers and weapons tanks of Pro-Russian gangs were firing upon the Ukrainian armed forces soldiers who hold the Fort near the Heater.

Lugansk direction. In this segment of the line dividing the militants of the Russian-terrorist troops during the day a few times were intense fire on Ukrainian soldiers who protect the village Crimean. The enemy used mortars of calibres of 120 and 82 mm grenade launchers of various systems. Since the beginning of the day, two Ukrainian soldiers were injured.

Units of the ATO forces fully control the situation in the area of responsibility and are in readiness to give the enemy a fitting rebuff.