The militants near the Cool Beams fired at local residents, there are dead – intelligence 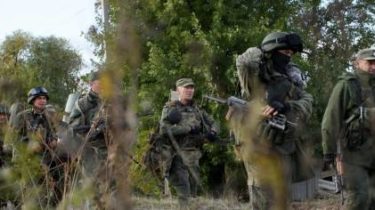 “May 17, soldiers of the 11 separate motorized rifle regiment (Donetsk) 1 AK fired at civilians in the village of Kruta Balka”, – stated in the message.

According to scouts, in result of attack two locals were killed and one was wounded.

As noted, on the same day a Russian soldier 9 private infantry assault Marines (Novoazovsk) 1 AK during the dispute shot and killed a soldier called from the local community.

“The command of the regiment taken measures to avoid the investigation of the death of a soldier and conceal the real combat losses among the personnel, drafted from the local population”, – assured in the exploration and added that the victims usually do not bring in morgues and bury them without any fixation.

Earlier, the Ukrainian military reported that Russian cadets came to pass exams in artillery fire under Mariupol. According to fighters ATO, in may grow suspicious enemy activity.