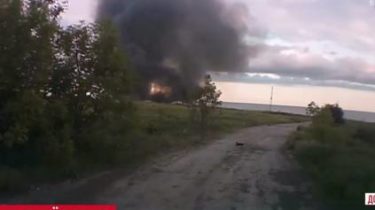 Residents of the village of Berdyansk, on the eve of which hit the militants with heavy weapons, called the shelling the most powerful from the fall. The attack destroyed several houses, according to a story TSN.19:30.

The first arrivals were recorded on the evening of Thursday, may 18. The shelling lasted for 30-40 minutes, after which the enemy shifted to Shirokino. Three debut of the projectile were isolated – the military said that it was zeroing. Then started heavy fire – pairs every few seconds. Eyewitnesses counted 26 powerful blows. “That fall was not these attacks”, says a resident of Berdyansk, Valery Petrovich.