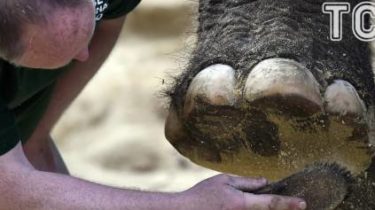 In the Internet appeared the video, as one of Chernivtsi car washes, bathe an elephant, says TSN.12.00.

Unusual client using the dimensions in the room did not fit, so washing it had under the open sky.

The elephant was quiet, obviously the hose he liked it.

The animal, as it turned out, of the traveling circus that just arrived in Chernovtsy and settled across the road from the car wash. It is therefore likely that the elephant had been brought in to freshen up after a hard road.