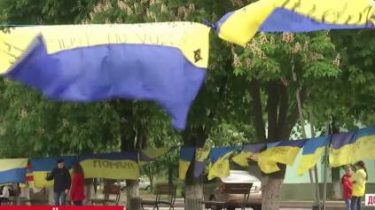 Closest to the front of the cities of Donbass moved several hundred national flags. The event’s aim is to unite Ukrainians and strengthen the faith in victory, says the story TSN.19:30.

Panels have different origins: some are transferred to the civil, the other hovered before military positions. A lot of flags signed by the real Ukrainian patriots from the now occupied Crimea, Luhansk, Donetsk etc. the Roads of Donbass, in General, are traveling almost four hundred banners from more than 200 cities of Ukraine. “This is a national campaign in honor of victory and peace in Ukraine”, – explained the organizer, volunteer Catherine Walewska.