The “Book Arsenal”, the deputies admitted, what verses do you seduce women in a romantic relationship 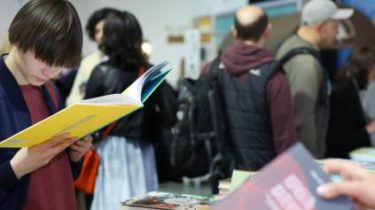 The “Book Arsenal” was visited by Ukrainian MPs and well-known artists, public figures, whose relationship to literature is interested journalists. First of all, that of the deputies asked, as they relate to poetry, do read poetry favorite women, according to a story TSN.19:30.

Egor Firsov answered this question in the affirmative, but refused to develop the theme. On the question about why is he doing it naked, the Deputy replied: “why not?”. Alexander Roitburd poetry took place between alcohol and kissing in romantic relationships. Ivan Malkovych ever read a verse in response.

So did the people’s Deputy Serhiy Taruta, however recited it in Russian. And the Minister Yevhen nischuk described the provocative question, and then admitted that he tried on the role of Romeo and Casanova. “This is a very candid story. When it is evident I say we must seize the moment and everything should be done quickly today. Triggered”, – he answered the question, if he had to seduce women literature. But Igor gryniv showed the books bought at the Book Arsenal, and read a poem that seduces women, refused: “No, blame that I Spokusa now.”