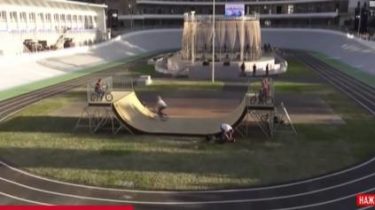 In Kiev solemnly opened the updated track. City officials on this occasion, gave a Grand show with pop stars and special effects, says the story TSN.19:30.

Teamwork exercises under the musical accompaniment was performed by the students of national University of physical culture and sports. Guests of the ceremony saw a spectacular laser show. And on a makeshift screen was shown the history of a sports facility. The cycle track was opened by the mayor of Kiev Vitali Klitschko.

The track is one of the oldest in Europe, he’s 108 years. The last nearly half a century it has not worked. On the resumption of construction of the speech came after the revolution of Dignity, when the track returned to the communal property of trade unions. Besides the pads for Cycling under the open sky, the complex has a variety of gyms, warehouses for bicycles and the like. “It will do for a career DYUSSH different colleges and fans, but with the instructor and a special permit will have to be, because here the trauma is high. It was all restored at the expense of city budget of Kiev – about 100 million hryvnia,” – said the head of the Shevchenko district state administration of Kiev, Oleg of Garage.