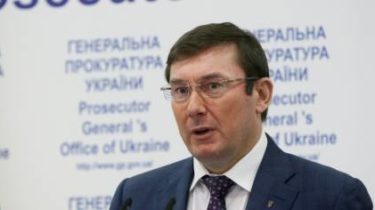 The head of the PGO Yuriy Lutsenko signed a suspected former employee of NABOO, detained in Sumy region for extortion of a bribe.

This was stated by the attorney General in comments to journalists, reports “Ukrainian news”.

“In suspicion, which I signed yesterday, he appears as a former law enforcement officer who demanded a bribe to current employees of law enforcement bodies”, – said Lutsenko.

Besides, the head of the GPU said that according to the wiretaps, arrested for extortion of bribes was presented to the current staff of the NABOO, and noted that the evidence of his dismissal is not.

According to Lutsenko, to establish whether the detainee is a current employee of NABOO, the court can only.

We will remind, on Friday, the press Secretary of Yuri Lutsenko Larisa Sargan reported on his page in Facebook that in Sumy region during receiving 150 thousand dollars of a bribe detained Nausnice. Later, the press service of NABOO called disclosed information “false and provocative”, adding that the man was dismissed in February 2017.