The save on scenarios. Network laugh with Vilkul, who came to the store for bread and yogurt 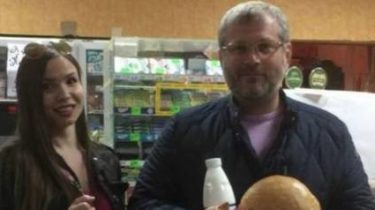 MP from “Opposition bloc” Oleksandr Vilkul announced at his page in Facebook photo, which he holds in his hands a bottle of yogurt, a loaf of bread and cheese.

The MP said that he had gone to a little shop in my hometown, Krivoy Rog, because he tries “not to shop in large networks, because the earnings will go to the yachts and planes of their respective owners”.

“While the earnings of small businesses will go to pay of groups of children and the life of cities,” he wrote.

This photo was not spared in the social networks. Politician Gennady Korban jokingly recommended to buy Vilkul only processed cheese, and glassware from under dairy products – to take over the store.

Other users wgauth that the best backdrop for photos Vilkul will be the premises of the Prosecutor General.

@Maped After the sermon on the mount Vilkul fed the people bread, yogurt and 2 cheese

Earlier in Dnepropetrovsk eyewitnesses caught Vilkul during a demonstration by laying flowers to the tomb of the Unknown soldier: after multiple takes during filming he took the bouquet and went with him to the journalists.