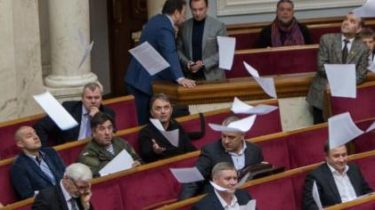 In voting for the language law , the majority of the parliamentary factions demonstrated a rare unity. This is evidenced by the results of a roll call.

Thus, from the Bloc of Petro Poroshenko was 107 out of 140 MPs, only one MP abstained. 12 people’s deputies decided not to vote, although he was registered at the meeting, among those who did not vote – Alexey Goncharenko, who yesterday announced his discontent. Supported the project and Serhiy Leshchenko, although his bride Anastasia topil’s’ke expressed very strong dissatisfaction with the quota set by the language broadcast.

The majority of narodopravstva also supported the law – 68 of 81. Three of the faction did not vote, among them the Minister of internal Affairs Anton Gerashchenko.

Also great support the project received in “Samopomich”, “Batkivschyna” and the Radical party generally voted “for” the almost all – 19 of the 20 deputies, one did not vote, however truants in the faction was not.

At the same time, the low rate of voting “for” the group “Revival” and among the independent MPs. In “Revival” the majority did not vote – 16 out of the 26, six were absent, but supported the quota only four MPs. Among unaffiliated “for” vote of 28 out of 47 people’s deputies and one vote against.

But in “opposition bloc” law did not get any “Yes.” It is among opublikoval, except for one individual, gathered opponents of the law – 14, “no”, and 9 MPs abstained, and 16 chose not to vote, and four did not come to the meeting.

Roll call vote for the law on language quotas from tsnua

The purpose of the bill is to strengthen legal safeguards in the implementation of broadcasting, in particular, the establishment of a compulsory share of television programs, including news broadcasts, made in the Ukrainian language during the day.

The draft Law on amendments to some laws of Ukraine concerning the language of audiovisual (electronic) mass media (second reading) (presented 23.05.2017) from tsnua