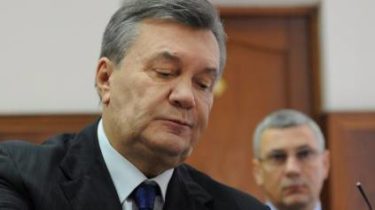 The high specialized court of Ukraine refused to satisfy the petition of lawyers deprived the title of President Viktor Yanukovych regarding the change of jurisdiction of criminal proceedings on the charges of treason.

“The high specialized court of Ukraine refused to satisfy the petition of lawyers of Yanukovych about the change of jurisdiction of criminal proceedings against the former President,” she wrote.

We will note, earlier the protection of Yanukovych appealed to HANA because of the alleged intervention of the public Prosecutor in court the automated distribution of judges.

On may 4 held the first hearing in the case against Viktor Yanukovych of treason. The defense asked the court to postpone the preparatory meeting, before the decision of the Appeal court to change jurisdiction of a case, but the request was denied. The court also allowed to organize a videoconference for the participation of Yanukovych at the next meeting. Protection deprived the title of President of Ukraine Viktor Yanukovych stated that his interrogation through a video conference should be organized under the procedure of international legal assistance. This “will prevent the leveling of accusation testimony of Viktor Yanukovych”.