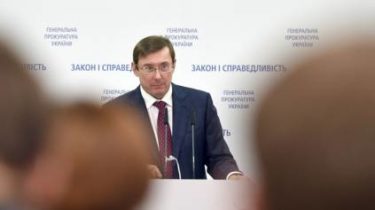 The Network has published the names of all the MPs who signed the initiative to Express no confidence in the current Prosecutor General Yury Lutsenko.

This was announced by the people’s Deputy Yegor Sobolev in Facebook.

“As promised, we publish the names of all MPs who have not signed up and who signed the initiative to Express no confidence in the current attorney General. The latter is now 44 for the whole Parliament. In order for the resignation of Yuri Lutsenko left the forces Happy, we need 150 signatures of parliamentarians and the vote 226” – he wrote.

According to Sobolev should dismiss the Prosecutor General, “in which Viktor Yanukovych and Andriy Klyuyev stopped to look for Interpol; wherein the critical investigation of the GPU in best case simulated, from the case of the “towers Boyko” to Ilovayskiy tragedy.”

It became known that Lutsenko will report in Parliament

“If there are doubts about the work of the General Prosecutor’s office, to the quality of their investigations – these are the signatures for the resignation of Prosecutor General Yury Lutsenko. Anyone can Express their position in order to have an effective attorney General,” – said the Deputy. Then the corresponding was signed by 14 deputies with the required minimum of 150.