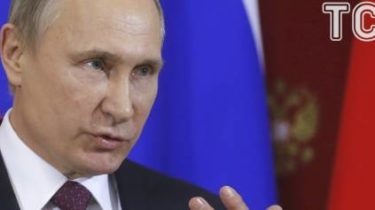 The Kremlin announced that Russia’s President Vladimir Putin is not thinking to participate in 2018 elections as the independent candidate.

This is reported RIA Novosti with reference to the press Secretary of the President Dmitry Peskov.

“No election campaign is conducted in the usual work. You see the President’s schedule, and, accordingly, no such thought, no such plans”, — he told, answering a question of journalists, consider in the Kremlin scenario in which Putin will go to elections as the independent candidate, not the party “United Russia”.

Putin spoke about the choice of his successor

Recall, the illegitimate, the Russian state Duma in the first reading endorsed the postponement of elections of the President in 2018, on the day of the annexation of Crimea on March 18.

The illegitimate speaker of the state Duma Vyacheslav Volodin supported the idea to hold the elections of the President of Russia in 2018, 18 March — the day of signing between Russian President Vladimir Putin and his Crimean puppets of the so-called “Treaty on accession of Crimea to Russia”. The Kremlin said that considering the initiative to postpone the election of the President of Russia in 2018 on March 18.

Earlier media wrote that Putin is putting together a team to guarantee his election victory for a fourth term by a wide margin in 2018. It should hold regular elections, and the election of Putin, which are more similar to a referendum of confidence to the incumbent President.

Sands somehow hinted at future plans of the Kremlin. Regarding the upcoming presidential elections in Russia, Peskov made clear that Putin will go for a new term. He could not clearly answer the question of the journalist will be allowed Alexei Navalny to participate in elections of the President of the Russian Federation in 2018.