“Take me away”. The grim face of the Pope at the meeting with trump became a meme 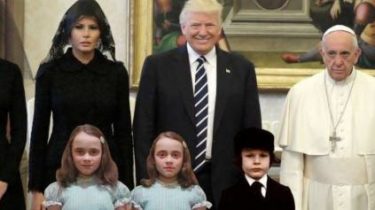 Internet users laugh at the grim face of the Pope during the first joint meeting with the President of the United States Donald trump and his family.

The audience took place yesterday, may 24. Nick first discussed the clothes and the veil of the first lady Melania trump and the President’s daughter Ivanka. Subsequently, they reached the Pontiff. Laugh user it kind of depressed for a joint photo.

Users began creating memes with his face and joked that the Pope is mentally asks to save him and take him away from trump. Also it seemed ridiculous video, which the Pontiff refused to shake hands with the leader of the United States.

It is fair to say that during the meeting, the Pope and trump has exchanged a handshake, and a separate photo of the Pontiff smiled.

Trump is wrong the pope is not like him. See the difference between Obama v/s trump visit. #donaltrump #pope pic.twitter.com/DzYpYseMCi

The look the Pope gave Trump was epic! #TheResistance pic.twitter.com/zLRqJmKcd3

Even the Pope wouldn’t want to hold hands with Trump. #JimmyKimmelLive pic.twitter.com/800zsnd7c0

@9GAG May the Lord protect the Pope pic.twitter.com/CgFgo5OVSS

POPE: Yep that’s me. You’re probably wondering how I ended up in this situation. pic.twitter.com/oovyADd8r9

Pope “Get me out of here”