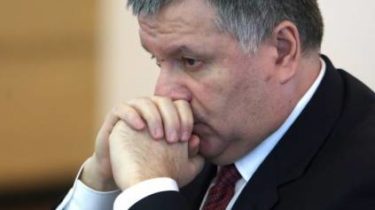 The total amount of bail for detained former high-ranking tax of about 350 million UAH.

This was announced by the Minister of internal Affairs Arsen Avakov, Interfax reports.

“It is now considered by almost all measures the detained former officials of Fiscal service. And we have now not so little – about 350 million of collateral, 7 man is now arrested,” said Avakov.

For minor posts, he added, will later be appealed.

“Several people, in respect of which the decision of the court accepted the personal obligation and minor liens, we make a decision with the Prosecutor’s office, and we will appeal,” – said the Minister.

Meanwhile, the show with helicopters and delivered ex-tax to the capital cost to the Ukrainian budget of 330 thousand hryvnias, and those the money spent has paid off, reports TSN. In particular, despite the fact that the Pechersky court releases one-by-one tax, but thanks to the mortgage budget money was spent.

Note that large-scale anti-corruption operation was conducted by the Prosecutor General and the interior Ministry. After the search was arrested 23 former high regional officials of the Ministry of income and fees from the Eastern and southern regions, as well as Kiev. On this worked together 1700 five hundred police officers and prosecutors.