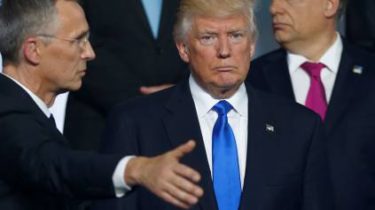 The President of the United States Donald trump is not very friendly reacted to the Prime Minister of Montenegro, Dusko Markovic at the time of the opening of the new headquarters of NATO.

During the celebrations trump roughly pushed Markovic to become the next Secretary General of NATO Jens Stoltenberg.

The Prime Minister of Montenegro reacted to the situation with a smile, and trump pretended like nothing happened.

Clumsy and cocky. Pictures of tramp, laughed at the Network

Recall that Internet users scoff at the gloomy face of the Pope during the first meeting with the President of the United States Donald trump and his family. The audience took place on 24 may. Nick first discussed the clothes and the veil of the first lady Melania trump and the President’s daughter Ivanka. Subsequently, they reached the Pontiff. Laugh user it kind of depressed for a joint photo.