In Kiev, right in the puddle after the rain drowned the jeep 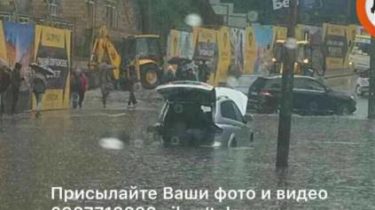 Tatar on the Kiev after the rain formed a deep puddle, resulting in one of the cars stuck in the water.

“Kiev. A Tatar woman drowned crossover. Go around the puddle”, – stated in the message.

Rainy weather capture Ukraine. The weather on 27 and 28 may

We will remind, in the Rivne region yesterday sudden downpour flooded the salon of the trip bus with 23 passengers. Through heavy rainfall in the village Clsica Dubno district, on the plain is flooded the bus. Water with dirt up to about 40 centimeters. People were forced to stand on the passenger seat.