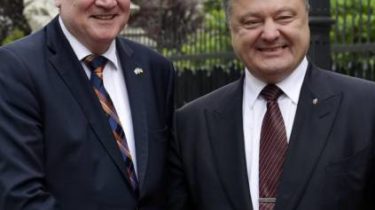 The President of Ukraine Petro Poroshenko held a meeting with the Prime Minister of the free state of Bavaria, Horst Serovera.

The sides discussed the development of the situation in the Donbas.

The President of Ukraine informed about the latest unconstructive steps of Russia, aimed at undermining the Minsk agreements. The head of state stressed the importance of maintaining sanctions pressure on Moscow, which is the key to the restoration of peace not only in Ukraine, but also the preservation of European order. Horst Seehofer confirmed that the normalization of cooperation with Russia is possible only under condition of performance by Moscow of the Minsk agreements.

Petro Poroshenko noted that the adoption by the EU of the decision on granting visa-free regime for Ukrainian citizens, as well as the expected entry into force of the Association agreement will significantly strengthen cooperation.

The head of state stressed that last year’s significant growth of trade turnover between Ukraine and Bavaria is a consequence of the introduction of deep free trade with the EU, the impact of reforms and evidence of recovery of the Ukrainian economy.

We will remind that the President of Ukraine Petro Poroshenko said that he had discussed with Federal Chancellor of Germany Angela Merkel scenario the pressure on Russia in order to carry out the Minsk agreement.