The shield of Europe: klympush-Tsintsadze said that Ukraine is an Outpost of Western civilization 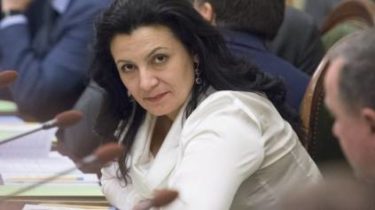 Today Ukraine is the shield of Europe, an Outpost of Western civilization.

This was stated by Vice Prime Minister for European and Euro-Atlantic integration of Ukraine Ivanna klympush-Tsintsadze, – said portal.

“For us Europe is not a geographical identity, not just free space and welfare or set standards. It is our conscious choice for which we are very bitterly paid and continue to pay the cost of the lives of the Heavenly hundred Heroes and our defenders in the East of Ukraine”, – said Vice Prime Minister.

She expressed appreciation to the governments and peoples of Europe for their political, technical, financial and moral support in this difficult for our country period. At the same time, klympush-Tsintsadze believes that to succeed in the new geopolitical realities of Ukraine needs unity within the country, shared responsibility, support and accountability to him, governments at all levels, as well as reliability in the eyes of our European partners.

Vice Prime Minister noted that the introduction of a visa-free regime is extremely important but far from final step of Ukraine towards European integration.

“June 11 will be able to travel freely around Europe, and we have the free movement of goods, services, capital and – to fulfil the ambitious objectives of the Association Agreement between Ukraine and the EU,” she said.

We will remind, on Wednesday, may 17, hosted a historic signing of an agreement on visa-free regime between Ukraine and the EU. In Strasbourg, France, formally signed the final document, the President of the European Parliament Antonio Tajani and the representative of Malta, as a country, which currently holds the EU presidency. The procedure was watched by the President of Ukraine Petro Poroshenko.