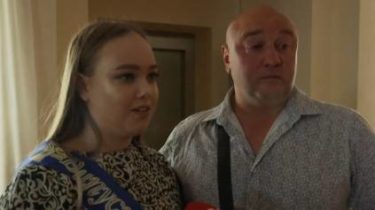 In Vinnytsia school correspondent TSN found the Diana Beketov, with which the phone came intimate photos of the people’s Deputy Sergey Shakhov.

The people’s Deputy Sergey Shakhov caught a spicy correspondence in the workplace, in Parliament yesterday, may 26, but he assured that it is only a joke to his “old friend”.

The girl said that everything is a lie, and she hadn’t even seen that correspondence.

“I was shocked. I found out about it from the Internet. It is cowardly because the person who helps, gets a bad reputation. This correspondence I have not even seen. But I don’t think that there is something there. It’s childhood friends and what is this” – said the schoolgirl.

In turn, the girl’s father Yury Beketov nahvalivat MP and says he helps them for a long time and is not the first forwards the funds to his mother, whose Alzheimer’s disease.

Always loved women. The MP admitted that he was looking in the Parliament erotica

“Sergey Shakhov is a very good man. This is a childhood friend. We are one of the city of Stakhanov. This man for a long time helps our family. He transfers the money to help my mom. Now they are refugees and we took them here in Vinnitsa. This is my mother Isolde Beketov and brother. They are disabled. And Sergey Shakhov helps our family. Why I talked to page daughter – I don’t have a good phone. And what it was I wrote. He helps many families and my including,” – said Beketov.

The main character of the story Diana adds that the MP for a very long time helping them, but she still didn’t remember the name “helper” and called the MP Viktor, not Sergei.

“There is a family of Isaev. They had nine children: two of their seven foster (seven and sick with AIDS). And uncle Victor, Oh, uncle Sergei, it helps not only to us but to them. He is very kind. It’s all very strange how it happened,” says Diana.

Each people’s Deputy Yuri also added that every month the official sends them one and a half thousand hryvnia.

“Took his half and the other half took off to his brother,” adds Yuri.

In history, many of which don’t add up. According to the MP, Diana was adopted, however, according to Yuri is his own daughter.

Also Sergey Shakhov told that Beketov had not seen for eight years, but Yuri told TSN that he had met with MPs a year ago.

“I saw her probably a year ago. That’s when he became a MP, I met with him in Kiev. Yes, we have long not seen him, but last time we met was somewhere in June or July,” added Yuri.

Today, may 26, we also found out that photos of the correspondence of people’s Deputy Serhiy Shakhov was published by the journalist Alexander Dubinsky.

According to him, the next day after the incident in the Verkhovna Rada there are people who are trying to keep track of who “leaked” the journalist photos of the Deputy of the ruling party Yadav, who was allegedly texting with his mistress.

“This strange people – are shooting journalists. “Tihar” on the podium of the press, as I understand it, this is another proof of the “unprecedented freedom of expression” about which recently told the President, ” wrote Dubinsky.