Megamarch in vyshyvankas, concerts and greetings: as Kiev celebrates the day of the city 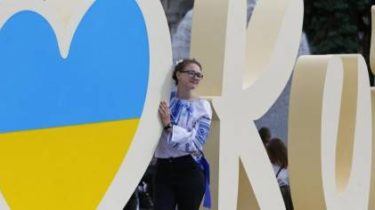 The last Sunday of may the Kyiv traditionally celebrates the city Day.

Kiev, in particular, is celebrated for several days.

On the Day of Kyiv residents of the capital have already congratulated the President of Ukraine Petro Poroshenko.

“I congratulate our magical and majestic Kiev happy holidays!” – he wrote on his page in Facebook.

In the social network posted the video, which shows the center of the capital in 1967.

With regard to the programme of the celebration, may 25-28 at the Sofia area will last for Four days of dance, music and flowers.” The audience for demonstrations from schools, dance studios, music groups, symphonic and folk orchestras, dance workshops and open stage for those wishing to dance.

From 26 to 28 may in Kiev will host a major Cycling Race Horizon Park, which is a partner of “nebesna krynytsa”

On St. Sophia square will also host a three-level art object with a height of 9 meters “Cake wishes”, which will serve as an observation deck for residents and guests of the capital. Thus every visitor will be able to submit requests to the city from itself and record it on a special sticker.

In addition, on may 27 everyone will be able to participate in Megamare in embroidered shirts, which will be attended by theater, dance and circus groups.

The March will begin at 12:00 in Shevchenko’s Park, will be accompanied by music from Ukrainian musicians and make a stop in Kyiv city teacher’s house, National Opera of Ukraine, Golden gate, building of the security Service of Ukraine.

The event will end on St. Sophia square in a mass performance of the anthem of the capital “How not to love you, my Kiev!”.

Earlier it was reported that in Kiev this weekend to limit the traffic on the main streets. On the occasion of celebrating the day of Kiev will be held a bike ride. This Saturday from 8:30 to 15:30 will be restricted traffic in the area of the Olympic stadium and subway station “Lybidska”. Partly closed from 6:00 to 18:00 will be the center – from the European square, Khreshchatyk and Shevchenko Boulevard to Victory Boulevard.