What happened in the area of ATO: militants fired at Novozvanovka, Marinka and Shirokino, 8 wounded soldiers 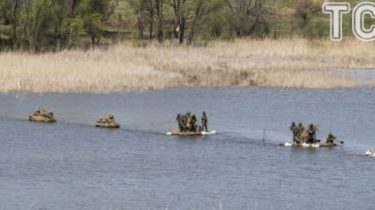 In the headquarters of ATO claim that the situation in the ATO zone is still tense: only with the beginning of the day on may 27, militants carried out 18 attacks on positions of the APU.

According to the summary of the press center of the ATO headquarters for the day as of 18: 00 on may 27, 8 were wounded Ukrainian military.

Coastal areas. In this area the contact line around 6.00 o’clock in the morning of Pro-Russian illegal armed groups from 120-mm mortars fired at our positions near the village Chermalyk. Did not stop enemy attacks and in the area of Shirokino, Water and Gotovogo where the enemy throughout the day repeatedly fired from small arms and grenade launchers of various modifications. In addition, near Marinka militants carried out the shelling of the fortifications of the ATO forces from heavy machine guns.

Donetsk direction. On this front the Pro-Russian gangs more than 5 times used the weapon against the Ukrainian soldiers. However, the intensity of the enemy fire and the characteristics of the weapons which the militants had carried out the attacks had devastating consequences. So, around 1.00 a.m., the enemy carried out bombardment of defensive fortifications of the ATO forces near the village of Zaitseve of 122-mm artillery systems. Subsequently, on the same plot the line of contact, gunmen used anti-tank missile system.

Later, from the vicinity of the temporarily occupied Donetsk, the militants fired at Ukrainian soldiers who hold the Fort near the village of Sands, mortars caliber 82 mm automatic mounted grenade launchers and heavy machine guns. Unrest was in the southern suburbs of the Town, where illegal armed crossing of the beat on the fortifications of fighters from mortars of caliber of 120 mm and 82 mm, and small arms.

Lugansk direction. Since the beginning of the day on this stretch of the line of contact of the Pro-Russian armed groups twice opened fire on our strong points. In particular, near Novozvanovka militants carried out the shelling of the military personnel of VS of Ukraine from the automatic easel grenade launchers. Also, the enemy small arms was beaten near the settlement Donetsk.

We will remind, on Donbass fighters of the division was relocated in the resort village Sedov, which caused outrage among local residents.