Behind the scenes of a special operation against ex-tax. Nasirova was bleached, and prosecutors made mistakes 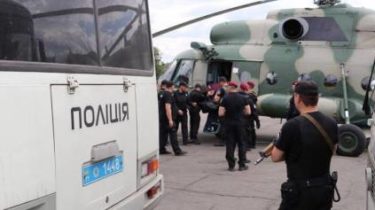 In Ukraine held a large-scale special operation on detention of the former tax of times of Yanukovych-Klimenko.

The arrests took 1,700 militiamen, five hundred prosecutors from the East to the capital.

Immediately of three Ukrainian airports – from Kharkiv, Odessa and Dnieper – the capital flew helicopters with the detainees. 25 suspects were taken to Kyiv to observe the letter of the law and to manage to declare sanctions to all defendants 72 hours.

The result: judges of the Pechersk district court of Kyiv has released four people who will be on call; seven suspects were released from the courtroom with the wearing of an electronic bracelet and a pledge from 99 thousand to 15 million UAH; 12 more arrested with the ability to make bail.

– the amount determined by the court finding the suspect was 326,128 million;

The cost of the RAID – 300 thousand hryvnia.

It should be noted that the country is not accustomed to such large-scale operations, investigative and special units, especially conducted so bright. Spectacular element was really thought out, brilliantly helicopters, twisted hands behind his back in handcuffs, yesterday’s generals behind bars, a fabulous sum charged of embezzlement and the sheer size of the withdrawn values and all this was available live on television and online by millions of viewers passionately stuck to their screens.

“For planning and conducting such operations needed a pretty large-scale covert investigative actions. He was held. It was important to sustain the secrecy of the preparation and planning of the operation, to prevent the leakage of information, and that was done… it was Important to hold her fast in one day due to the large number of searches and a large number of masking steps, the volume of these actions was quite large,” – said the speaker of the Ministry of internal Affairs Artem Shevchenko.

However, the secrecy of the RAID was broken and the three criminals managed to escape. However, law enforcement authorities assure that will reach everyone. Meanwhile, shocked the detainees were preparing for trial.

It should be said that all the detainees – former key figures of the tax administration of the country. All of them were taken to the Prosecutor General’s office, for the delivery of suspicions of crimes. Almost all of them relate to the huge tax Scam created by a group of former Minister Oleksandr Klymenko. Experts called it “a scheme of tax areas”. Simplistically, it looks like this: a real business that would pay taxes had issued a fictitious contract of sale with a fictitious firm, which in turn had issued bogus tax credit with the firm by transit. The function of a transit country was to “whiten” operation. Controlled by the transit country had to pay in the budget only 1.5% of the money, the rest went into the “tax hole” where already allocated for specific private pockets. In the state budget has not received nearly 97 billion hryvnia, according to investigators. That is not the value of the company – literally the whole of Ukraine worked on the enrichment of the Yanukovych clan. Now the guilty must be punished, and stolen back to the state and then begin the first simple questions to law enforcement. First of all, the Deputy Prosecutor General Anatoly Matios somehow it just drain to the press the name of the main expert assistant investigation, he was also accused Roman Nasirov.

One of the detainees of the ex-tax authorities seized the passport of the citizen of the Russian Federation.

“This operation we have not been able to do if we did not help the Chairman of the state tax fiscal service Roman Nasirov. Because to understand the depths of tax law, thanks to his assistance, the bulk of the work was done. I’m not ashamed to say that this is the man who in this segment did everything in order to solve all these tax courts to help collect evidence of the involvement,” – said the chief military Prosecutor of Ukraine Anatoly Matios.

Commentators immediately called these words an attempt of the Prosecutor to whiten the reputation of the accused is also in a major embezzlement Nasirov. Go ahead: wave RAID without delay stumbled on a rock unreformed Ukrainian courts. For their solutions, with 23 detainees arrested half 12, and the rest got a chance to abscond, or at least to influence it. The law, indeed, allows not to arrest suspects in economic crimes, but the Deposit is determined completely incommensurable. Say received as collateral funds are less than 0.5% of the declared amount stolen. Consequently, there arose a fair suspicion that punishment, as such, will not be.

The expert community immediately pointed to the obvious failings of the prosecutorial investigation, which can damage penalty tax thieves. Another reason for skepticism was a strange coincidence in time of the operation and the report of the attorney General in Parliament during the year of its work. Sensational were his words, which can be interpreted as the beginning of a tax Amnesty. Or explain the tax origin of the funds or pay taxes. 18% to sleep and be proud of the rich Ukraine! If you want to live, drive around in armored “cubes” with security, to live in the house such as Klyuev – just pay for the taxes, I do not mind”, – said the Prosecutor General Vitaly Lutsenko

However, the Amnesty of capital should apply the new law to the business for sure I have no fear of hidden reefs. Yes, and very ambitious special operation can be considered only a beginning, although the result promises to quickly deliver to the court indictments. The country is waiting for the long promised big landings, this case has received wide attention and such publicity and the entertainment will not give off the rails.