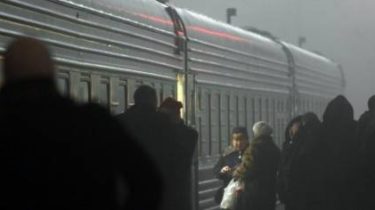 State of NEK “Ukrenergo” and PJSC “Ukrzaliznytsia” in the past year, together invested in their units in the occupied territories 836 million.

This is stated in the official responses of these companies to the queries of MP Victoria Voytsitskoy, who published “the Mirror of week”.

“According to data provided by these companies, “Ukrenergo” in 2016, spent 154,906 million UAH on your unit, which operates in uncontrolled territory (NCT), and “Ukrzaliznytsya” — 681,238 million UAH”, — said the Deputy Voitsitska the article on the newspaper’s website with a link to the relevant documents.

According to her, “Ukrenergo” at the same time, decided to “not notice” of the resolution of Cabinet of Ministers No. 263 of may 7, 2015, which the government ordered the company to Finance its office in the occupied areas only due to the contributions from other energy companies operating there.

“The national Commission performing state regulation in the energy and utilities (NKREKP), lays in tariff “Ukrenergo” funds to the extent necessary for the financing of the networks is only controlled territory, but the company is spending an inappropriate way — just nedofinansiruetsja controlled areas and at their expense provides almost free the work of trunk grids in the “young republics”, — said Wojcicki.

Speaking of “Ukrzaliznytsia”, the MP in his article emphasizes that the company not only provides free operation of the Railways in the occupied territories, but also delivers the goods, “by which the rebels killed Ukrainian soldiers”.

“On trains with ammunition, which come from the Russian Federation, not just lazy writing — an infrastructure for their delivery to the front line kindly pay a Ukrainian citizen. Moreover, statistics on transportation provided by railway, shows that only 2016 from NKT came over 2 thousand wagons of the forest. Who controlled, used this wood for the mines, or bunkers, of which shoot at our soldiers?” — the Deputy wrote.

We will remind, at an emergency meeting of the Council of 15 March the decision was made to cease trade with the occupied territories of Luhansk and Donetsk regions. However, the decision does not apply to those businesses that are under jurisdiction of Ukraine and pay taxes in the budget.