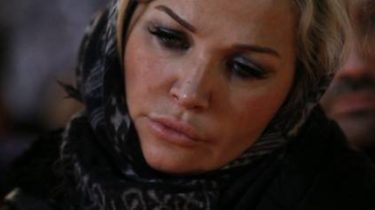 The widow of former Russian state Duma Deputy Denis Boronenkov – Maria Maksakova told about the kidnapping in Belarus the FSB it driver the day before the murder.

“Going by our driver the day before, crosses the border of Belarus… On the checkpoint of Gomel stops the driver and allegedly there are called guards. And actually comes in two buses with the FSB-schnick, our driver steal”, – she told in interview to TV channel ZIK.

Maria Maksakova argues that the driver escorted in the Bryansk oblast of the Russian Federation.

“They kidnapped from the territory of Belarus, escorted him in the Bryansk region, where they detained him for 12 hours, deprived of communication, not fed, not allowed to sleep, asked a lot of questions… When in the end, Vlad (driver – ed. still crossed the border of Ukraine and arrived in the morning in Kiev, Denis has been some relief… Instead think about what all this was about,” – said the widow Boronenkov.

Maksakova added that she has all the data of the people who kidnapped the driver, and it can provide them.

“I still don’t believe that Putin was aware of what will happen on 23 March… I think they (the FSB – ed.) did what they wanted and dreamed to do,” she said.