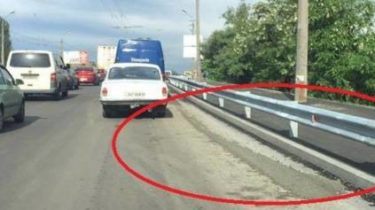 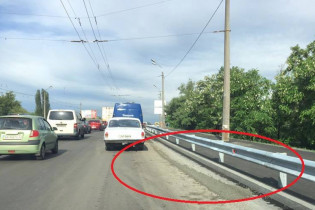 On meadow St. in Kiev, which was just overhauled, overloaded concrete truck ruined a new cover.

In particular, the FSB noted that the city streets run every day, hundreds of cars loaded with gravel, soil, sand and concrete to such an extent that part of their cargo remains on the roadway.

“It is extremely disappointing when such cases occur on the newly renovated parts of streets and roads. Another such case – Lugovaya str. It hasn’t been a week, as this street was repaired, and the carriers have already put their “mark” on the new coverage”, – stated in the message.

In “Kievavtodor” called on businessmen and truck drivers to “respect the work to each other and to learn not to throw away our money, because the road network is a joint property of the community and funds for its maintenance – this means each one of us.”

The recipe for a perfect road. As in the Lviv region have created a perfect 200 km coverage on the international highway

Recall that 3 Ukrainian oblasts there will be concrete roads. The Ministry of infrastructure is planning the construction of concrete roads in Dnipropetrovsk, Mykolaiv and Odessa regions.

The head of “Ukravtodor” Slawomir Nowak told how much money and time is needed in order to put in order all Ukrainian roads. According to experts, to rapidly improve roads over the next five years we need about 50 billion hryvnia per year.

“But if we have at least 25-30 billion in the next year, at least 40 in 2019 and will continue to increase this amount, while spending money only on those 50 thousand kilometers of roads of national importance, in 7-10 years we will repair the whole network,” he said.