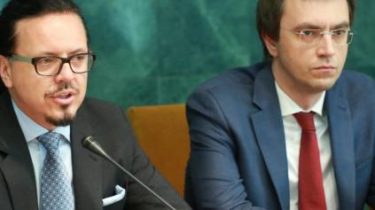 The Minister of infrastructure Vladimir Omelian hopes for the resignation of the head of “uz” [ Balcona for 5 June.

This was stated by the Minister of infrastructure Vladimir Omelian the TV channel Ukraine, reports 112.

According to him, June 5, Balcona the contract expires and he has to go due to the fact that failed to meet expectations.

“You know, I have a special I had no expectations, I had credibility that he quickly exhausted in a month’s time. Was the consideration of the question of the situation of the “Railways” transport profile Committee of the Verkhovna Rada. The discussion was very acute. I expressed strong dissatisfaction with the results. And I hope it will be taken into account, in particular, the Cabinet of Ministers. 5 Jun contract ends. I think he should be the last date of his stay in this position”, – said the Minister.

In turn, Balcon previously stated that, in the case of non-renewal of contract “cream from reforming Railways will gather another head of” because “is often the one who takes on this job will not be able to stay in the company until the moment when you see the result.”

Scandal with “Ukrzaliznytsya”: Omeljan called the unreasonable prices on toilets in trains over 1 million UAH

We will remind, the railway scandal in full swing, recently, Balcon caught Omelyan on incompetence. The head of “Ukrzaliznytsya” Wojciech Balczun believes that statements about the resignation of the leadership of the companies the Minister of infrastructure Vladimir Omelian covering for their own incompetence and lack of professionalism.

20 APR Omeljan declared readiness to vote for the resignation of the head of PJSC “Ukrzaliznytsia” ticket Balcona, one-year contract which expires in may 2017. According to the Minister of infrastructure, he has three candidates for the post of head of “Ukrzaliznytsya”. In particular, among them former railway workers and Western experts, but he did not name names.

Earlier, the head of the Ukrainian government Volodymyr Groisman has publicly supported the head of “Ukrzaliznytsya” Adalbert Balcona in conflict with the Minister of infrastructure Vladimir Emel’yan.