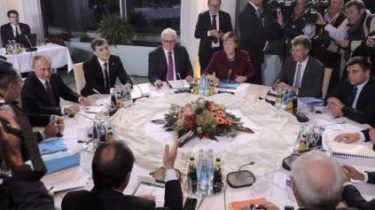 Telephone conversation leaders “channel four” (Russia, Germany, France, Ukraine) to be held in the coming days after the preparation of the special report of the OSCE mission.

“Recently”, – said the press Secretary of the President Dmitry Peskov, answering the question, when do you plan to contact leaders in the Normandy format.

However, he clarified that we are talking about a telephone conversation.

“Before the phone conversation should be a special report of the OSCE mission”, – said in his turn, Russian presidential aide Yuri Ushakov. The participants of the meeting “channel four” (Russia, Ukraine, Germany, France) in Berlin may 30, will hear representatives of the OSCE and heads of working groups of the Contact group on settling the situation in Eastern Ukraine.

State Secretary, Deputy foreign Minister Grigory Karasin, who will present at negotiations the Russian side, said that Moscow will demand the “immediate lifting of the blockade from the South-East of Ukraine”, which, in his words, “prevents the establishment of normal operation in terms of dialogue between Kiev, Donetsk and Lugansk”.

“The rest is details. In General, we expect a fairly sharp, constructive work”, – concluded the Deputy Minister.