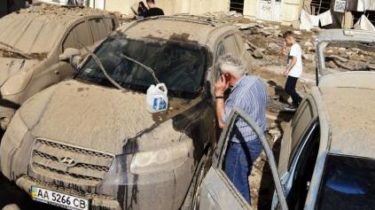 A powerful burst pipe in the Goloseevsky district of Kiev, which occurred on may 29, it was published in the foreign media.

Video “explosion” of the pipe, captured by a surveillance camera, on the pages published by the American channel ABC and the British newspaper the Telegraph.

As previously reported, the afternoon of 29 may in Kiev, exploded pipe, from under the asphalt broke the stream of water from a height of 6 floors. The time of the accident filmed by a surveillance camera. As a result, several shattered Windows in nearby houses, fragments of asphalt and damaged five cars, flooded residential and office space. In “Kyivenergo”, where they spent testing their networks, has announced that losses will be offset in accordance with the law.